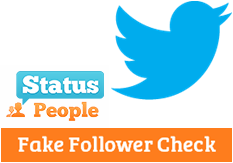 Are you on Twitter and rocking with other tweeps you follow or followed by? Twitter is a place where anyone can follow you unless you protected your tweets. It doesn't matter if the followers count on your Twitter account goes higher and higher everyday, isn't it? It means you are being more popular and others would love to see what are you tweeting all day along. Probably, you may right about the attitude of being followed by many number of people. But it's another aspect of the story. Do you know what's the other side of the same story?

Yeah, it is. It's about spammers. You may have heard of fake or spammy followers who would love to follow others and promote their links. They are pretty annoying. They are being paid for the annoyance they create. So they don't mind being annoying at all. Anyway you can report or block them on Twitter easily. Or it could be followers you buy to expand your dominance on Twitter and reach more users with your business. They may feels like real followers. They don't spam, but have no activity. They don't help you spreading the word. Is it why you buy followers for?


Do You Have Fake Followers?

It's good to know if you have been followed by spammers. Sometimes spammers may inactive. They are not only spam by sending you links on Twitter. As they follow you, they can work out their dirty tricks to hack into your Twitter account and publish your credentials online too. Until your information goes public, you will never get to know that your account has been hacked. Else, it's just the silence around you. Security matters.

Other fact of spammers are that they are not helping you to grow and build your target audience. Though you have 1000s of followers, they may not listening to you though you were tweet frequently. So if you calculate your productivity on Twitter with current follower count, you won't get expected results. Hence, it's always good to know if you have been followed by fakies and how many of them. It may not pose a great threat for you, but you can know of number of followers you can count on.


Fake Followers Check by StatusPeople is a simple tool online which helps you identify your followers. It categorize your followers into fake, inactive and good. Do you wonder how it works?

Basically, it will check for followers who has been following enormous number of tweeps, but haven't being followed by anyone or followed by only few people. Isn't it a valid reason in most scenarios? So if you would love to find out how it goes for you and your favorite Twitter accounts, here we go.


4. Fake followers checker will now start analyzing your Twitter account. It may take a while depends on your follower count. Once it's done with analysis, it will come up with percentages of Fake, Inactive and Active Twitter followers you have.


* You can check out fake followers on your friends' Twitter accounts using search bar on the result page.

I do use Tweepi to check the same results, but I think there you have many options but not about the fake followers. I guess they mainly tell you about who is following you back and who is not, so that you can unfollow them or reciprocate those who are following you.

Never heard of Fake Followers and when I checked through the method you suggested, it showed 1% fake. I wonder how can we remove such people from our list of followers, or there is no way of knowing about that.

Thanks for sharing and letting us know about yet another wonderful online tool. :)

I haven't heard of Tweepi dear :) Thanks for letting me know. I think it's similar to Commun.it which introduced by Lisa on her blog lately. You may wanna check it out too.

I had the same question dear. Though it shows percentage of spammy accounts, it doesn't reveal who they are. But as I mentioned, the algorithm they apply for sample follower data of ours and mostly looking for accounts with many number of followers but followed by 0 or few people.

It will take lot of time if we need to find 'em manually. Hope they will improve it to reveal fake followers later on :) Anyway for now you can use this tool to find out how many active tweeps following us. More active means possibly greater chance to spread the word. For businesses, it's great way to know the followers they bought are real or not. In addition, we can measure how much we are exposed to security threats.

Personally, I think as we are aware of whom following us and as we don't buy followers, we are safe on Twitter. But yet it can help get some insights about our followers :)

Thanks for sharing your experience on Twitter tools including this one dear :)

I'm sure you would like the free version of Tweepi once you go through it, because you can easily unfollow or follow people you like and it has a few more good features. Haven't yet tried Commun.it though would do so really soon.

Just checked it out dear :) Seems an interesting service. I will check it more thoroughly. Mostly I do follow interested brands and organizations to get latest news and updates.
So mostly I wasn't being followed by 'em I hope :D LOL... When it comes to people it's friends and I don't follow back if they don't interact with me even once with good attitude unless I find interesting and reach out. I do follow and reach out people seems interesting.

I will let you know how it goes for me Harleena :) Thanks for your suggestion dear.

Hi Mayura,
I wish they let you see who the fake followers are. Do you think that will be next for them? I hope so :) Love the feature.

I wish if they had it in this version :) Anyway still we can get some understanding about our accounts. Hopefully I think we don't have spammy problems much as I haven't heard of spammy activity lately from anyone.

I hope they will come up with that feature. As I explore about it I found that they gonna merge it with another social media management tool. Stay in alert ;)

Glad you loved it dear :) Check out your friends too...

Now that's a really cool site Mayura...  I had to hop over and check out my account and I'm happy to report that I have no fake followers and only 3% that are inactive.  I clean my Twitter account out each month so since we are at the end now it's about that time.

I'm not following a lot of people and the ones that do follow me come on gradually.  I'm not one that has to have a huge following because I'd prefer the actually be interested in what I share instead of just wanting the numbers.

No fakies? Wow... That's awesome. You are taking preventative measures on your Twitter account by reviewing and cleaning it each month. That's a good tip for tweeps including me, 'cause I haven't dig much deeper into my followers lately though I just check out my recent followers.

I think that is a good motive towards followers Adrienne. Quality vs Quantity. So, it's nice to know that you haven't being followed by so called spammers, right? ;) Clean and clear.

Thanks for sharing your stats and always value your point of view dear :)

This tool from Status people is really unreliable, if you just go read this you will see an experiment that they ran http://www.roimedia.co.za/blog/fake-follower-tool-a-faker-itself/


Thanks for letting me know about it :) It's better to know all the aspects of it. I always believe tools are not the ones we can totally depend on. Any of it has bugs to fix. The algorithm that Fake Followers tool is using to determine fakies is quite simple and it can go wrong too.


Anyway here we can't find who are the fake followers exactly, so for me personally I don't find it's vital to keep checking fake followers there. But just good to know how it works and how it can be improved :) Never depend on tools, totally.


Thanks for sharing information and commenting dear :)