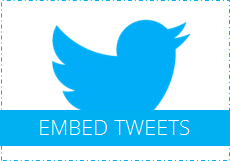 Also you might wanna build up stories with displaying relevant tweets. In such a situation, you may try copying and pasting tweet text on to your post. But rather than just showing off a tweet, would you like to embed a tweet and enable other users to retweet, reply or favorite it while on your site?

The revamp of Twitter has made major changes in design and served some new features for users. One such feature is fully functional Embedded Tweets. Twitter now made it possible for users to embed and render their favorite tweets or @replys on websites in an attractive way. It doesn't matter whether it's originated from your profile or not. You can embed any kind of tweet instantly.

You may find it as an attractive or useful as a promotion methodology too. In addition to showing off the tweet, readers who visiting your site will be able to reply, retweet or favorite to that particular tweet right away without leaving your site. Also it will enable users to follow specific person who responsible for that Tweet too. Here's a preview of embedded tweet. Do you like it?

However if the tweet you wanna embed contain images, videos or any other media, it would display with the embedded tweet unless it has been uploaded via third party services. Actually you don't wanna worry about images uploaded directly via Twitter and videos from YouTube in this scenario. And eventhough if particular user deletes a tweet from his profile after you embedding that on your site, the content of tweet will still be appeared on your site.

Sounds interesting? Yeah... sometimes it could be really useful for you. Let's try it out.

2. Locate the tweet you wanna embed on your site.


6. Now grab the given code snippet. Further, you can see the preview of your tweet too. 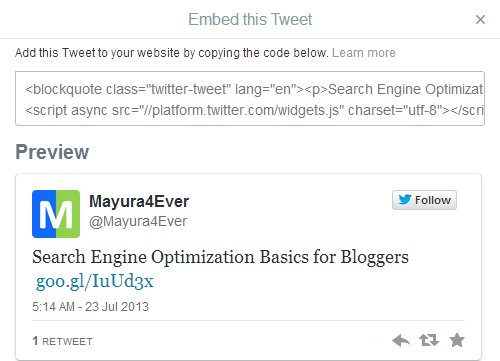 7. Now add the code snippet on your blog or website where you wanna show it off.


Note: If you are a Blogger user and wanna add it as an element, you can add your button code snippet via HTML/JavaScript element. Read How to Add an External Widget or Codes to Blogger. Else if you wanna render it in a Blogger post or page, read How to Embed External Content on Your Blogger Posts or Pages.